Europe’s Beating Cancer Plan is an ambitious EU project which aims to reduce the cancer burden and address cancer related inequalities. The draft report from the Special Committee on Beating Cancer was published on Friday 25 June. The report identifies areas of action, and has this to say about tackling the burden on health from smoking: 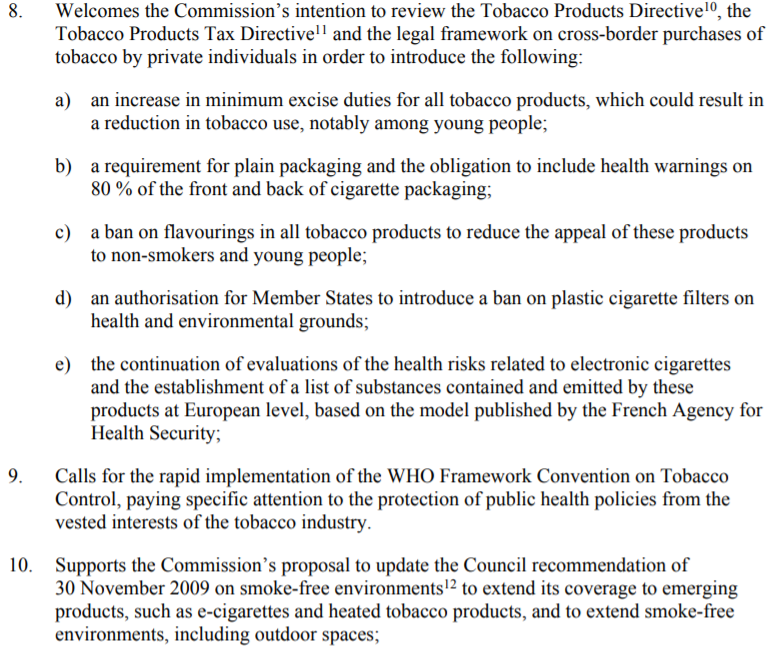 It is unclear whether the proposed increase in taxation and flavour ban - mentioned in points 8(a) and 8(c) - are in reference to combustible tobacco only or to both combustible and non-combustible safer nicotine products.  ETHRA is seeking clarification on that.

The next steps for the report are set out in the European Parliament’s press release:  ‘Just published: Draft report "Strengthening Europe in the fight against cancer":

ETHRA’s partners contacted their Health attachés to make them aware of the various consumer issues by pointing them to ETHRA’s manifesto.

Link to the meeting announcement and provisional agenda:
https://data.consilium.europa.eu/doc/document/CM-3705-2021-INIT/en/pdf

MEPs have been asking the Commission some good questions :

Tomislav Sokol on use and effects of e-cigarettes
https://www.europarl.europa.eu/doceo/document/E-9-2021-003014_EN.html

We will be very interested to see how the Commission replies to those.

Here is a question which already has a reply - Peter Kofod asked about including tobacco harm reduction strategies in Europe’s Beating Cancer Plan:

Tobacco Tax Directive
The public consultation on tobacco taxation closed on 22 June. Responses to calls to action to participate in the consultation were very positive, suggesting a significant number of consumers and consumer associations took part. The importance of keeping safer nicotine products (SNPs) affordable was highlighted in our recently published report on our Nicotine users survey, which found that the high cost of SNPs is a major barrier to quitting smoking.

The report into the application of the TPD has been described as a missed opportunity by Patrik Strömer, Secretary General of the Association of Swedish Snus Manufacturers. Pointing to the fact that Sweden has the lowest smoking prevalence in the EU, largely thanks to snus, Mr Strömer said: “The EU’s own data shows a clear connection between low smoking rates and the availability of less harmful alternatives like snus, but the EU doesn’t seem interested in exploring the connection and it’s potential implications for public health”

Read more at the link:
https://snusforumet.se/en/eu-tobacco-products-directive-a-wasted-opportunity-to-learn-from-sweden/

ETHRA’s concerns were outlined in our May news roundup.

Scientists write to Commissioner of Health and Food Safety Stella Kyriakides
A group of scientists and clinicians have called on the EU Commission and SCHEER to initiate a second scientific opinion on e-cigarettes as soon as possible, to examine the relative risks of e-cigarettes compared to smoking

Estonia
On 10 June, eight Estonian MP’s submitted a new bill modifying the Tobacco Act to the Estonian Parliament. The MPs are hoping to extend the selection of flavours available, restore domestic online sales and allow general retailers to display vaping products. We wish them every success.

Read more at the link:
https://nna.ee/en/182-estonia-dreams-of-becoming-smoke-free

Finland
Do read Vapers Finland's comprehensive response to the Ministry of Social Affairs and Health's request for an opinion on the reform of the Tobacco Act.  The response is available to download in both Finnish and English:
https://vapers.fi/2021/06/vapers-finland-ryn-vastaus-sosiaali-ja-terveysministerion-lausuntopyyntoon-tupakkalain-uudistamisesta/

Germany
On 11 June the Bundestag signed off on the Tobacco Tax Modernisation Act (TabStMoG). Amendments to the bill meant that the original proposal - to tax e-liquids based on nicotine strength - was replaced by a tax regime that will tax all liquids intended for vaping, by volume. The bill is a disaster for public health as it will make low-risk safer nicotine products more expensive than smoking.

Read more at the links:
https://ch-lippmann.de/blog/dampffreiheit/2021/06/de-tabstmog-politik-gegen-harm-reduction/

Netherlands
This month ETHRA wrote to MPs at the Ministry of Health, Welbeing and Sport, to protest at the proposed flavour ban being forced through parliament. We cautioned against the unintended consequences such an action would have on current vapers, and for those who smoke who could benefit from switching to vaping. Also included was our July 2020 letter to Dutch Health Minister Mr Blokhuis.
Read our letter in Dutch
Read our letter in English

Norway
In advance of the legalisation of nicotine-containing e-cigarettes, expected next year, the Ministry of Health has submitted a proposal for consultation that would raise the legal age to purchase vaping products to 25. The proposal would also ban flavours and introduce plain packaging.

Sweden
Good news - the government’s proposal for a new alcohol, narcotics, doping, tobacco, and gambling (ANDTS) strategy, which we reported on here, has been rejected by the Swedish parliament. The Social Affairs Committee recommended voting against the bill because it failed to examine the relative risks of non-combustible nicotine products in comparison to cigarettes. Johan Hultberg of the Moderate party insisted that an updated bill must include tobacco harm reduction, saying that:  “A serious policy should be based on the fact that it’s much better for people to choose snus over smoking”

Read more at the link:
https://snusforumet.se/en/swedish-government-rebuked-for-failing-to-include-tobacco-harm-reduction-in-public-health-bill/

UK
On 10 June MP’s debated the Tobacco Control Plan, which sets out measures to deliver a smoke-free 2030. The pivotal role safer nicotine products can play in reaching smoke-free targets featured strongly throughout the debate. It was pointed out that those who smoke should be made aware of the availability of all low-risk non-combustible products - nicotine pouches, heated tobacco products, snus - which can assist smoking cessation.

Addressing growing levels of misinformation and misperceptions of the relative risks of safer nicotine products compared to smoking was identified as being crucial in order to maximise their harm reduction potential. A further positive development came when Jo Churchill, Parliamentary Under-Secretary of State for Prevention, Public Health and Primary Care, announced an evidence based review for snus.

Read more at the link:
https://www.ucl.ac.uk/news/2021/jun/uk-wide-e-cigarette-trial-help-homeless-quit-smoking

On 10 June we launched the EU Nicotine User Survey report. The survey was huge, with over 37,000 responses. The survey examined smoking and the desire to quit, use of safer nicotine products and barriers to switching caused by European and national regulations. The full report begins with a two page summary. The data will be published on the ETHRA website soon - watch this space.

Links to some of the articles about our report:

Lots to watch:
The Global Forum on Nicotine took place on 17 and 18 June. Over the course of 2 days experts discussed a range of topics, including on the Consumer Voices panel, which featured international consumer advocates. DADAFO’s Peter Stigaard appeared on the panel, telling us that Denmark’s recent anti THR measures could be very bad news for consumers in the EU:

“Denmark is a perfect country to try things out. If you want to introduce legislation you can use Denmark as a test tube”. 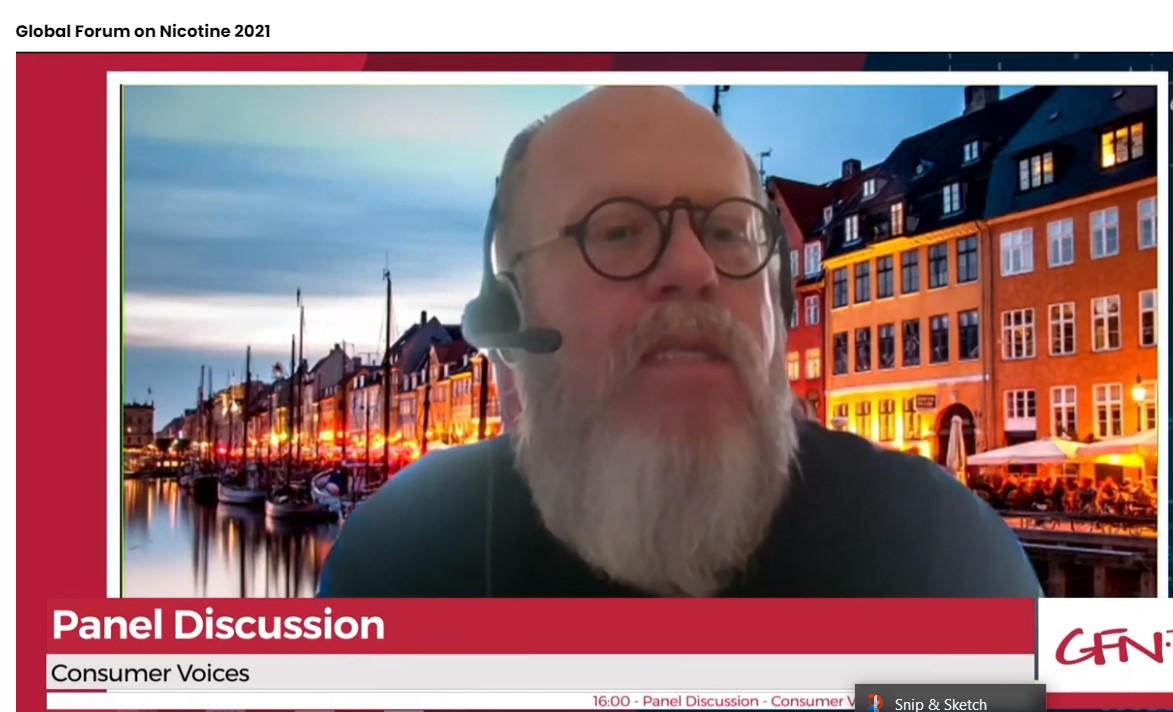 The conference also included GFN Fives, short multimedia presentations submitted by the GFN audience.  ETHRA submitted a short video, featuring voices from some of our consumer partners.  You can watch (and like!) that here: 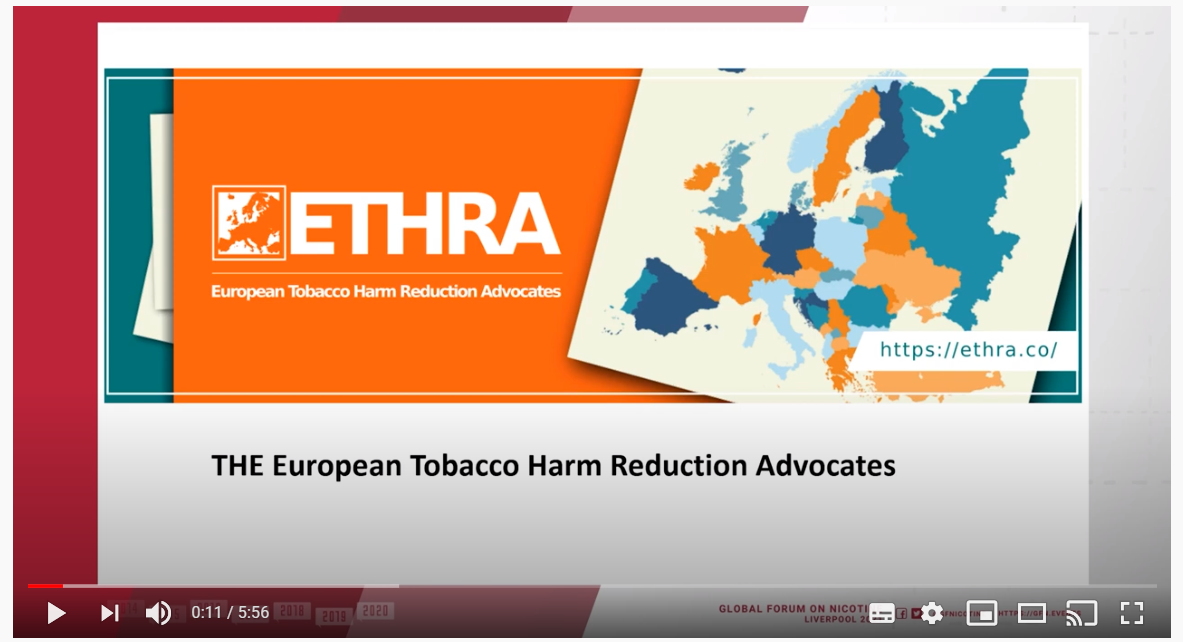 The Flavour Debate
Flavours are an integral part of the success of vaping for quitting smoking, this is borne out by scientific studies as well as consumer testimony. However, those opposed to tobacco harm reduction continue to claim that flavours attract youth and can act as a gateway to smoking, despite there being no evidence for such a gateway effect. An article in European Scientist aims to give some context to the flavour debate and cautions that flavour bans are: “stripping vaping of one of its most attractive attributes and running the risk of neutralising it as an effective weapon in the war against cigarettes.”
Read more at the link:
https://www.europeanscientist.com/en/research/the-nuances-of-the-flavoured-vaping-debate-explained/
Tweets by europethra