Eurobarometer: Attitudes of Europeans towards tobacco and electronic cigarettes

On 3 February 2021, the long-awaited Eurobarometer report was published. Titled “Attitudes of Europeans towards tobacco and electronic cigarettes,” the survey examined European citizen's relationship with tobacco and related products. Fieldwork was conducted between August 2020 and September 2020 and involved interviews with 28,228 people from 27 EU member states and the UK.  Data from the previous Eurobarometer report in 2017 is also made available for comparison. It is an extensive report, 334 pages long, with separate factsheets available for each member state plus the UK. A 54-page summary of the main points is also available. The importance of the Eurobarometer cannot be overstated as it will feed into the TPD review due latest 20 May. See our article “What do we know about the TPD application report” for more details.

It comes as no surprise that Sweden has almost reached smoke free status of <5% smoking prevalence; widespread substitution of cigarettes with snus has seen to that. The UK is a success story too, having experienced the sharpest decline in smoking rates since 2006. A large part of this success must be attributed to the UK having public health agencies which support and promote tobacco harm reduction (THR). The value of pointing smokers to safer nicotine product to help with cessation attempts cannot be underestimated.

Despite the well-known risks of smoking only slightly more than half of current smokers (53%) said they had attempted to quit at some point. The majority (76%) of those who did make a quit attempt did so unaided. For those who sought assistance, 13% used nicotine replacement therapy and other medications, 11% used vapour products. A meagre 6% of smokers sought assistance through medical support and smoking cessation services.

But does vaping really help with smoking cessation? According to the report the answer is yes. 31% of those who successfully quit smoking said they used vapour or similar products; from 14% in the previous Eurobarometer report, a huge increase of 121%. A further 27% said they had reduced their use of combustible tobacco products. There is scope for further gains in this area as only 2% of respondents said they were current vapers.

The main reasons for people starting to vape won’t come as a shock either. Stopping or reducing tobacco consumption was cited as the main reason by 57% of respondents, 37% said it was because vaping was less harmful than smoking (congratulations to those well-informed individuals), and 23% cited lower cost as the reason.

Open systems were the preferred choice of 72% of vapers, the very type of device the WHO are recommending should be banned. See our January news update for details.

The report makes a strong case for the importance of flavours, something I’m sure many prohibitionists won’t be happy about. Fruit flavours were the most popular by a large margin (48%), followed by tobacco (36%), menthol or mint (30%), candy (20%), and alcohol (4%). These figures are very important in light of proposals to ban all but tobacco flavours in the recently published EU Beating Cancer Plan. A rethink is surely needed now that the EU’s own data supports the fact that removing flavours would deny huge number of people access to the products that are keeping them from smoking.

As if evidence of the importance of flavours wasn’t bad enough, the mythical gateway hypothesis also took a hit in the report. Participants with a smoking history, whether current or former, were asked which product they tried first. The response was overwhelmingly combustible tobacco at 87%. Only 2% said they used vapour products before smoking.

It’s evident that vaping is providing a substantial public health benefit but is being hampered by constant streams of misinformation, often propagated by the EU themselves. This is borne out by the fact that 70% of people with little or no experience of vaping believe it doesn’t help with quitting smoking, and only 20% believe it does help. However, this number was substantially higher in the UK where 51% believed that vaping can help with smoking cessation. Once again underlining the importance for governments to guide people to safer nicotine products.

This misinformation might be the reason why support for restrictive regulations alarmingly high. 70% support banning the use of vapour products where smoking is banned, 47% are in favour of flavour bans (35% against), and 47% are in favour of plain packaging (36% against). Even more worrying is that 71% of respondents with little or no experience of vaping thought vaping should be regulated as strictly as cigarettes, and 65% believed vaping was harmful to the health of the user.

To summarise, vaping is providing a great public health benefit by reducing smoking prevalence, but disinformation is profoundly limiting the potential health benefits. Risk reduction is the main factor for those deciding to use vapour products, and non-tobacco flavours are of particular importance. Therefore, proposals to ban flavours are short-sighted, damaging and could very well prolong smoking. The gateway effect has still not materialised. 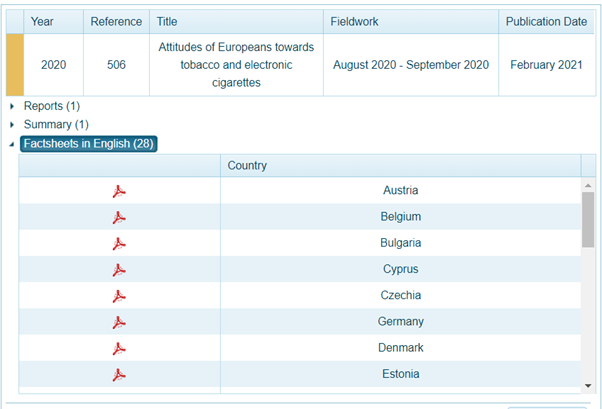