The Commission published their dismal Europe’s Beating Cancer Plan early in February. News from Germany added to the gloom, when the German finance minister revealed plans for exorbitant taxes on e liquids and to equate heated tobacco products with cigarettes there. Happily, the month ended well with the publication of Public Health England’s annual update, which confirmed that vaping is best for quitting smoking and that UK youth are not interested in vaping. Read on for more on that and lots of other news.

Beating Cancer Plan launch
The EU Beating Cancer Plan was published on 3rd February. The plan makes it clear that the Commission intends to use the Tobacco Products Directive and Tobacco Excise Directive to impose restrictions and increase the expense of vaping and other safer nicotine products. DampfFreiheit echoed the thoughts of many in calling it “a plan for more cancer” - see their [EU] Europe’s Beating Cancer Plan – Plan für mehr Krebs article for links to some of the many articles reacting to the Plan.

ETHRA letter and BECA exchange of views on the Plan
4th February saw an exchange of views on the Plan, between the Special Committee on Beating Cancer (BECA) and Health Commissioner Stella Kyriakides. Ahead of the meeting ETHRA and partners wrote to every MEP on BECA to express our dismay at some of the Plan’s proposals. Read our letter here:
Europe's Beating Cancer plan fails smokers

During the BECA exchange of views Kyriakides reinforced the Commission’s intentions:

“There was a question on smoking and tobacco. I just want to say here that we should recognise that cigarettes and other forms of tobacco use are responsible for 15 to 20% of all European cancer cases and this is a top avoidable risk factor. So we will be looking exactly at also addressing the next generation of tobacco related products to be a priority. We will be reviewing the Tobacco Products Directive and the Tobacco Taxation Directive.
But because many of us have spoken of prevention we need to really build into our education system and with children from a very young age, prevention programmes promoting healthy lifestyles so that we are able to be really effective.”

BECA consultation
4th February also saw the launch of the BECA consultation into the Impact of the COVID19-pandemic on cancer prevention, health services, cancer patients and research

The consultation was only available in English, replies had to be in English and it was restricted to organisations signed up to the EU transparency register. Despite these barriers, ETHRA and partners managed to respond to the consultation and described the impact that COVID-19 related shop closures have had on access to less harmful alternatives to smoking. The consultation was due to close on 25th February but has now been extended until 11 March.

Europe’s Beating Cancer Plan Webinars
Two webinars to discuss the Plan were held at the same time, on Friday 12 February.

Many THR consumer advocates attended the EU Health Policy webinar with Stella Kyriakides and used the chat function to make comments and ask questions. Perhaps the most alarming response came from Matthias Schuppe, cancer plan team leader, who stated that the Commission, and also SCHEER, agree with the WHO’s view that novel products are harmful to health.

John Ryan had stated that “the plan is built on a holistic and multi-stakeholder approach”, so we’ll see how that goes!

Sigmagazine’s article about the webinar:
Europe: "On the electronic cigarette we follow WHO recommendations" (Google translate)

The second webinar was a debate, “EU PLAN FOR BEATING CANCER: has it met the great expectations?”, with MEPs Tomislav Sokol, Sara Cerdas and Nicolae Stefanuta. During the webinar Sokol mentioned harm reduction and had this to say about the Plan and smoking:

“The Plan has a pretty negative view on e-cigarettes etc it is based on science definitely but I personally believe we should invest more research into this about more clear data on whether these kind of measures can help in some instances if there is no other better way. If somebody can’t stop smoking maybe it's better to reduce harm by this”

You can watch that webinar here.

Eurobarometer
Eurobarometer’s long awaited survey on Attitudes of Europeans towards tobacco and electronic cigarettes was released with the Cancer Plan. The data from this will feed into the Tobacco Products Directive review. Here are some early reactions to it:

The final Opinion will be adopted at the plenary meeting 3-4 March.

-  From the minutes of the SCHEER Working Group on e-cigarettes meeting on 19 January:

- From the Draft Agenda for the SCHEER Plenary meeting 3-4 March:

No information seems to be available on when the final Opinion will be made public.

See “UK”, below, for criticism of the preliminary Opinion in Public Health England’s annual update.

Croatia
The Dubrovnik Times has reported that excise duty on tobacco products (including vaping products) will increase. The largest increase in tax will be added to heated tobacco products, which will see an increase of as much as 75%.

Denmark
There is outrage at the news that the Danish National Board of Health and the Minister of Health did not release key information before the tobacco action plan was voted in. The tobacco action plan includes harsh regulations for safer nicotine products, based on the notion that vaping is causing young people to smoke. However, as DADAFO reports, the data actually show the exact opposite:

"Adolescents who start vaping or using snus would probably have started smoking if there had not been a low-risk alternative available. And the figures show that the few young people who start vaping or using snus do not go on to smoking tobacco. On the contrary, the figures show that young people who are already smoking are actually trying to quit smoking by switching to vaping or snus."

DADAFO:  The National Board of Health hid key information / https://dadafo.dk/sundhedsstyrelsen-skjulte-centrale-oplysninger/

Nyheder reports that the National Board of Health paid extra to get a bigger sample size for the Danish Smoking Habits 2019 survey, in a quest to find more smokers. Publication of that report was delayed by several months, meaning that politicians did not have access to the latest figures during the negotiations for the tobacco action plan.

Shockingly, the good news that vaping is not a gateway to smoking for Danish youngsters was buried - and legislation which will deny adult smokers access to life saving products was voted in.

“the existing legislation is adequate, and if the enforcers of the law would indeed enforce the law (no sales to minors) there would be no need for restrictions on products which satisfy adult consumers, and keep adults away from smoking tobacco cigarettes.”

Germany
The Ministry of Finance is planning a tax hike for e liquids, starting at €0.02 per mg of nicotine and rising to €0.04 in January 2024. This would make e-liquids much more expensive to buy than combusted cigarettes and would lead to a huge black market.
The draft law is here and ECigIntelligence reports that “The tax authorities also justify the decision by the “existing risk potential” of vaping products in comparison with traditional tobacco.” Research from the German Cancer Research Center (DKFZ) is being used to justify the measures.

Given Germany’s influence over the EU generally, this is a very worrying development which might distort the process of the revision of the Tobacco Taxation Directive.

Read more about that in these links:

Better German news from Koblenz, where the Higher Regional Court ruled that the advertising slogan “E-cigarettes save lives switch now” is not misleading, on the grounds that e-cigarettes are less harmful to health than combustible cigarettes.

Italy
Carmine Canino, president of ANPVU, participated in a conference held in Rome to discuss smoking and the potential for vaping to reduce smoking.  Carmine told the conference that traditional tobacco control measures are failing Italy’s smokers and that there is a duty to  promote and ensure access to less harmful products. Sigmagazine’s article is here. 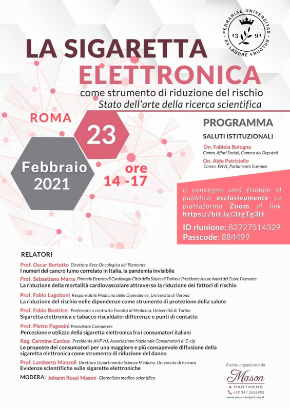 Netherlands
Acvoda presented their petition opposing the proposed ban on e-liquid flavours to the Dutch parliament.  The petition had attracted over 19,000 signatures.

Norway
A consultation has been launched on proposals to introduce excise duty on e-cigarettes and other nicotine products.

In January the Norwegian government reduced the tax for snus by 25%, in an attempt to reduce “trade leakage” to Sweden from cross border purchases:
Nå er det full priskrig på snus i dagligvarehyllene /
Now there is a full price war on snus on the grocery shelves

This report covers "the latest evidence on prevalence and characteristics of vaping in young people and adults in England" and also includes an update of the evidence of the impact of vaping products on smoking cessation.

Main findings from the STS data, from PHE’s update 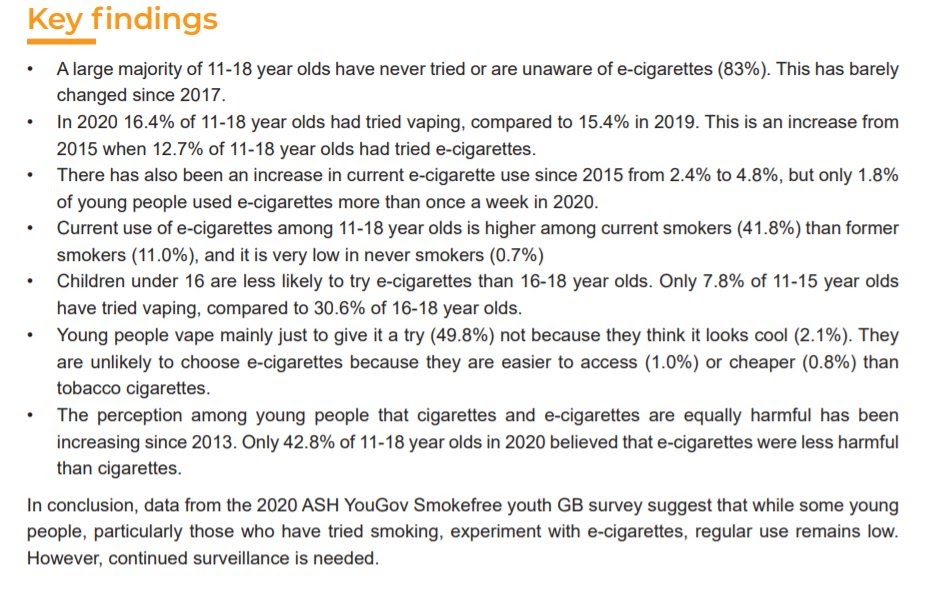 New Nicotine Alliance UK welcomed the confirmation that vaping is a popular and effective way to quit smoking and that the UK has no problem with youth vaping, but regretted that perceptions of harm are still going in the wrong direction, with an increasing number of people thinking that vaping is as harmful as smoking.

NNA welcomes the latest PHE review on vaping, but we can do more.

More from the UK:

This Consultation into tobacco and related products legislation will finish on 19 March:

Tobacco and related products legislation introduced between 2015 to 2016: reviewing effectiveness

Let’s help to keep the UK on the right path by responding to this with our experiences of tobacco harm reduction and of living with the TPD.

New Nicotine Alliance UK has produced this guide to help you:
Don't miss this opportunity to help shape vaping regulations

The cancer plan will be discussed in the health working group of the council.
The next meeting of the Employment, Social Policy, Health and Consumer Affairs Council is 15-16 March 2021: https://www.consilium.europa.eu/en/meetings/epsco/2021/03/16/
The agenda will be made public around one week before the meeting.
It is very likely that the Cancer Plan will be on the agenda.

The SCHEER final Opinion will be adopted at the SCHEER Plenary meeting 3-4 March.

Catch up on Clive Bates’ presentation on tobacco harm reduction, given to Drug Science on 10 February.
Watch the video here
View and download the slides here 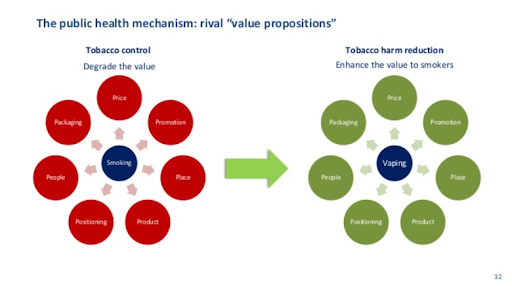