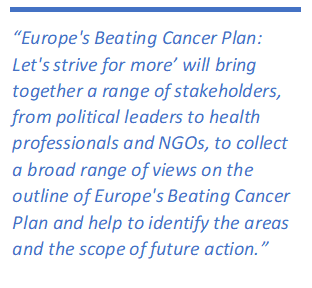 (EBCP) is a key EU initiative put in place to combat cancer, a leading cause of death in the EU, claiming an estimated 1.3 million lives each year. The initiative was launched on February 4th at an event in the European Parliament in Brussels, and includes two public consultations: the roadmap and a public consultation.

The roadmap, running from the 4th of February until the 3rd of March, invited feedback from stakeholders in the form of comment submissions. The public consultation, launched the same day but with a closing date of May 21st, was in the form of a structured questionnaire aimed more towards the general public. Responses to both consultations will be fed into a synopsis report which will be published alongside the draft cancer plan.

Speaking ahead of the launch, Health and Food Safety Commissioner Stella Kyriakides said: “The success of this plan will depend on the engagement of a wide range of actors. I hope that everyone will participate fully in this process and share their invaluable expertise, experience, and insight. We need everyone to contribute and ensure that our Plan is ambitious and far-reaching and has a concrete impact on the lives of our citizens.”

The importance of the project was underlined by the Commission President Ursula von der Leyen referring to the plan in her Political Guidelines for the Next European Commission: “As a physician, I am passionate about health. 40% of us will face cancer at some point in our lives and almost all of us will know the anxiety and grief of a friend or family member diagnosed with cancer. Survival rates are on the up, especially thanks to early detection and screening programmes. But there is a lot more we can do. I will put forward a European plan to fight cancer, to support Member States in improving cancer control and care.”

On September 10th, the Commission held a townhall meeting to provide an update on the findings and key messages of the EBCP to date. Whilst the meeting didn’t go into the finer details of the plan, what did become obvious was that cancer prevention will be a key factor in taking the plan forward in a progressive manner. This was not surprising as the Beating Cancer Plan factsheet states that four out of every ten cases of cancer are preventable, and von der Leyen had included prevention as a key element of the EBCP in her mission letter to Health Commissioner Stella Kyriakides.

Smoking is a leading cause of death and disease, yet it is in this area that we have clear evidence that preventative measures can work, through the adoption of safer nicotine products like snus and vaping products. It has been known for decades that people smoke for the nicotine but die from the tar. Since the use of safer nicotine products doesn’t involve combustion, there is no tar. You only have to look at the data from Sweden to see this in effect: not only does Sweden have a smoking prevalence that is almost at ‘smoke free’ status (<5%), Sweden also has the lowest rates of smoking related cancers and cardiovascular disease in Europe. This is largely due to the widespread use of snus, a product that is banned in the rest of the EU.

Equally, vaping has the potential to vastly reduce the burden on health from smoking. One of the key findings of Public Health England’s Evidence Review of e-cigarettes and heated tobacco products 2018 concluded: “the cancer potencies of e-cigarettes were largely under 0.5% of the risk of smoking”. The Royal College of Physicians also advised that smokers should be encouraged to switch to vaping, in their 2016 report, Nicotine Without Smoke.

One notable contribution came from Dr Konstantinos Farsalinos, who said: “Smoking is the most important, preventable risk factor for cancer. Any strategy to combat cancer should address smoking as a priority. Currently available evidence is compelling in supporting the vastly lower cancer risk of electronic cigarettes compared to tobacco cigarettes, the efficacy of electronic cigarettes as smoking substitutes and the large benefits expected in the health of smokers who switch to electronic cigarette use.”

Another pertinent submission came from Clive Bates who said: “the strategy of tobacco harm reduction is highly promising and has emerged over the last ten years. This means the replacement of cigarettes with low-risk non-combustible nicotine alternative. This strategy is advancing as an innovation-led, consumer-driven response to the harms of smoking that commands significant support in the expert community.”

ETHRA also set out our position on what a successful cancer plan would look like: “Citizens will have access to evidence based information about Tobacco Harm Reduction and access to all Tobacco Harm Reduction products. A key example of this is that there remains a widespread misconception amongst smokers and health professionals that most of the harm of smoking comes from nicotine, which is deterring many smokers from trying safer nicotine products. Giving good information and access to products will reduce smoking related disease and death and will enable many to live longer and in better health.”

The last point made by ETHRA is especially relevant in today’s climate, where safer nicotine products are constantly demonised and where there is a constant bombardment of sensationalist news stories, based on what can only be described as junk science.

Given the volume of contributions and the high quality of supporting evidence calling for the implementation of THR policies to reduce smoking related cancers, together with the fact that the Commission identified prevention as a key area to take action on, it was disappointing that these points were not directly addressed by the panel during the town hall. Questions were put to the panel on three occasions, by participants using the chat feature, asking about THR measures that could massively reduce the burden on health from smoking, but these were not answered by the panel.

However, although these questions were not answered by the panel, other participants in the townhall took the opportunity to give their views on THR, and vaping in particular. One suggested that vaping does not help smokers to quit and cited an in vitro cell study recently presented by the European Respiratory Society, suggesting potential harms from vaping. The second reply referenced the cases of lung injuries in the USA last year, but seemed unaware that they were caused by vaping illicit THC laced with vitamin E acetate, a compound never used in nicotine e-liquids and already banned in the EU.

Fortunately, THR advocates were on hand to correct these misconceptions, pointing out that the evidence for vaping efficacy in smoking cessation is obvious from population based national surveys which record smoking and vaping prevalence, and is also evidenced by the fact that there are millions of vapers across Europe, the majority of whom are ex-smokers. Adding to that the results of a cell study are not comparable to the effects vaping has on whole body systems. The Town Hall meeting was not recorded but the chat conversation will be made a public document.

Tellingly, these messages highlighted perfectly the points raised by ETHRA and other THR advocates: that the dissemination of accurate information about safer nicotine products will be imperative if the EU wants to seriously reduce smoking related harms.

It is apparent that there is strong support for THR measures among academics and citizens. There is a growing body of evidence that clearly shows tobacco harm reduction products help smokers to quit and vastly reduce their exposure to cancer causing chemicals. For Europe’s Beating Cancer Plan to be a success, measures must be put in place that allow smokers to take control of their own health, which must mean championing, not demonising, the use of safer nicotine products.