Facebook and Vapolitique
One social media platform appears to be doing its utmost to restrict the free flow of information.

Philippe Poirson found himself locked out of Facebook after he shared an article from the newspaper 24 Heures, regarding chloroquine tests on COVID-19 at the Lausanne hospital, on the grounds that he’d breached the policy on “organized violence and apology for crime”.

The crackdown on Vapolitique’s Poirson follows a ban being issued to Dr. Philippe Arvers, an addiction and tobacco specialist at the Armed Forces Medical Center, for sharing a VICE article denigrating studies by Stanton Glantz.

Guy Rosen, vice president of Facebook, said in a tweet that this was a, "problem with an automated system which removes links to abusive sites, but which has removed many other posts too.”

France
Thanks to the excellent work of SOVAPE, among others, French vape shops have been allowed to reopen following an instruction to close due to the pandemic.

Vapolitique highlights that keeping vape stores open can help limit the spread of COVID-19: “[It] reduces social interactions by preventing vapers who do not have the possibility of buying at a distance from adding to smokers in the same tobacco shops. This reduces the effects of promiscuity and facilitates social distance, which is currently the most effective means of prevention against the spread of the virus.”

Philippe notes that Fivape, an independent vape federation, and SIIV, the vape trade union, both published recommendations yesterday on the in-store rules to follow for the vape sector:

Philippe reports that a number of vape stores have set up drive-thru systems for orders by phone or email. They will also continue to ship these orders by post – for as long as the service runs - to help people in emergency situations and recent ex-smokers.

Martin Dockrell Responds
In response to an opinion piece about the role of smoking cessation and COVID-19 [link],  Public Health England’s Martin Dockrell called for vape stores to remain open as part of any action to slow the spread of the virus.

He wrote: “I note that … [France] and [Italy] exempted vape shops from their shut down. Very sensible. Great that food shops are kept going but most sell tobacco. It would be very unfortunate to protect tobacco supplies and block the supplies of the most popular and effective ways to quit.” 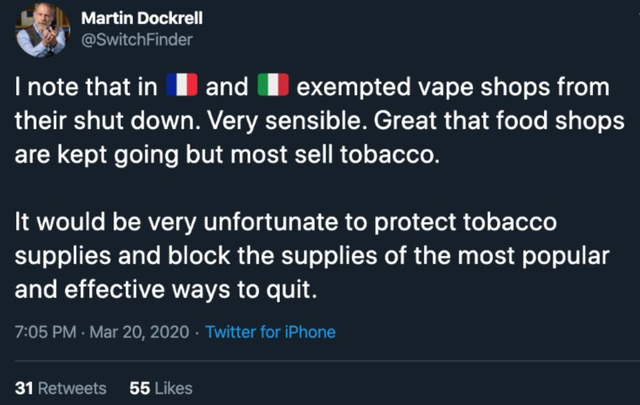 Greece
Dr Konstantinos Farsalinos has updated ETHRA on the current situation in Greece. He says that vape stores are regulated as food stores and therefore remain open. Greece instructed all stores other than food shops, vape shops and car repair centres to close.

Vape stores have been told not to allow vaping in-store, which includes the testing of eliquid flavours, and to focus on posting online and phone orders following advice given to the government by Dr Farsalinos.

Italy
Filtermag is reporting that Dr Riccardo Polosa has successfully reversed the nation’s decision to close down vape stores.

Italy’s response to becoming the European nation suffering the most from the COVID-19 pandemic was to ban public gatherings, close schools and shutting down most businesses – including vape brick and mortar shops.

Helen Redmond reports Dr Polosa saying: “I thought it was terribly wrong to keep tobacconists open and vape shops closed for the simple reason that in a situation of high anxiety and stress, people will smoke a lot at home where they are confined and they will expose a lot of bystanders to the risks of tobacco smoke. Particularly young babies, kids.”

“For people who have already developed a smoking-related disease, this is good news. They can feel for themselves the beneficial effects of the switch.”

Belgium
Belgian smokers and vapers are suffering from the government’s intransigence and blinkered view of tobacco harm reduction.

Frank Baeyens tweeted to ask the Belgium government to allow online sales or to open the vape shops. With no access to juice or vape products, fears are that many ex-smokers will return to using tobacco cigarettes the longer the situation is allowed to persist.

Spain
It has been reported that most shops are closed in Spain, but tobacconists remain open. Some tobacconists carry vape stocks, but this is far from an ideal situation for those seeking to reduce their harm exposure while legally using nicotine.

United Kingdom
The Independent Vape Trade Association (IBVTA) has issued advice to the vape industry on how to conduct business during the COVID outbreak. IBVTA’s advice can be read in the article linked below.

The UK Vaping Industry Association (UKVIA) has written to the UK government to emphasise the importance of keeping vape shops open. UKVIA says: “Our simple ask of you is to ensure that vape shops in towns and rural areas stay open during the crisis. We recognise and support the Government’s intensified containment plan for the virus but would urge you and your colleagues to look at the example of Italy. Dr Riccardo Polosa, a world renowned scientist and researcher on vaping and tobacco harm reduction and founder of the Centre of Excellence for the Acceleration of Harm Reduction, successfully argued that due to the stress caused by the Coronavirus, with the closure of vape shops vapers were highly likely to go back to smoking cigarettes to maintain their nicotine needs. This could be dangerous from a public health perspective and could heighten the risk of exposure of tobacco smoke to bystanders. This could also place a further burden on an already overstretched health system.”