Vaping took centre stage in what turned out to be a concerning briefing at the 146th session of the WHO Executive Board (EB146) in Geneva on 4 February. Put on the agenda by Iraq, a nation where vaping is not a priority, the subject was introduced by the Director-General of the WHO, Dr Tedros Adhanom Ghebreyesu. Although the session had only an informative and non-decision-making status, the direction desired by the Secretariat of WHO left no room for doubt. Tedros has taken up the language of the billionaire candidate for the White House, Michael Bloomberg, by repeating the unsupported belief that vaping is toxic and a threat to young people. "We know enough to have to protect our children from their harmful effects," says Dr Tedros as a policy line for the WHO. This was without discussing harm reduction in the context of smoking, nor relevant scientific work of independent organizations, notably those in the UK.

Attempting to support the predetermined anti-vape rhetoric of the session, Ranti Fayokun was summoned as a scientific expert. In a presentation that contradicted established scientific studies, she exaggerated the already ludicrously false claims about vaping. At one point confusing solid fine particles and liquid droplets, she then assured those listening that vaping gives off more formaldehyde than cigarettes, neglecting to explain that this finding occurred during unrealistic, ‘dry puff’ conditions which would make vaping impossible in a real-world situation. Following this and in a vain attempt to suggest that vaping increases heart attacks and strokes, she then referenced a bogus study that counted people who had heart attacks or strokes before vaping. To illustrate this baseless assertion for the delegates, (not visible on the WHO public broadcast) she used this photomontage, which is worthy of The Sun: 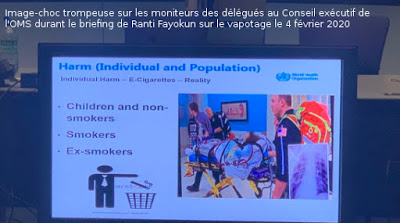 In a further bizarre twist, Ranti Fayokun said she’s concerned because some devices are adjustable. The health justification for this concern remains a mystery, the only logical explanation I can come up with is an aversion to freedom of choice on the part of the WHO expert.

Not relying on mockup spoof imagery showing babies vaping, as she did in the Senate of the Philippines, she still maintained that flavours of liquids are primarily intended to attract "children". She then distributed 50ml bottles of vape liquids that were purchased in Geneva but didn’t specify that bottles containing more than 10ml of liquid are sold without nicotine, in compliance with EU regulations.

Concerning people who stop smoking with vaping, "what is the harm for these people [ex-smokers] to use vaping. (...) What will you say to a parent who lost his or her child to EVALI?" wonders Ranti Fayokun. This is said in the full knowledge that these lung injuries are linked to adulterated vitamin E products on the THC black market and not to nicotine-containing e-liquid. Compounding the illogical leaps in her presentation, a few minutes later she returned to the subject of smoking cessation to affirm that there is no evidence that vaping helps people to quit smoking. The existence of British studies and the millions of testimonies are simply denied.

Using National Youth Tobacco Survey (NYTS) data on past 30 days use, at least one puff in a month, the fact that this data is not related to frequent use was omitted. Also omitted, despite mentioning knowing beforehand, was the fact that a large part of the vaping data concerned the use of non-nicotine products. Yet she said youth will become addicted to nicotine "and it will affect their health ". Not bothering to take into account the dramatic fall in adolescent smoking correlated with vaping.

She concluded by sticking to the script of the Bloomberg funded, anti-vape MPOWER report, published last summer.  Also present at the session was Vinayak Prasad, co-author of the report and former senior official in the Indian government, who unsurprisingly supported the call for a crackdown on vaping, along with Tibor Szilagyi, coordinator of the Secretariat of the Framework Convention on Tobacco Control (FCTC).

The WHO has taken an increasing prohibitionist approach to vaping, during COP7 in New Delhi Szilagyi stated that he would have voted to recommend to member countries "to prohibit or restrict vaping". 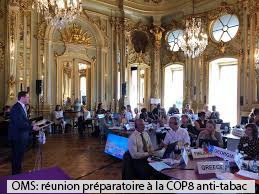 Should the English and the French continue to finance this propaganda?

The willingness of WHO to place this subject at this session of the Executive Board clearly points to the electoral agenda of the financial sponsor of the organization, Michael Bloomberg. For its part, Indian tobacco has already made its interests a priority by relying on the MPOWER report, co-authored by Vinayak Prasad, to prohibit vaping in India. The deep conflicts of the WHO on the subject, as highlighted by Sovape, are very worrying - especially the hijacking of the WHO’s anti-smoking activities by the American billionaire and Indian tobacco interests.

This should raise serious questions about the position of two major donor countries in this area of ​​WHO (up to 6% of the budget each); France and the United Kingdom. Should the taxpayers of these two countries continue to subsidise and be complicit in the political manoeuvring of the American oligarch and the financial interests of the Indian Tobacco Company (ITC Ltd), at the expense of the anti-tobacco campaign, FCTC and the human right to harm reduction?