The Dutch government are proposing to extend their ban on the use of tobacco products in public places to include the use of snus (see here for the notification detail for the draft act). The consultation period ended on 31 December 2019.

Bengt Wiberg, the co-founder of ETHRA partner EUforSnus, wrote to the Swedish government to urge them to respond to the proposal. We summarise the letter below. 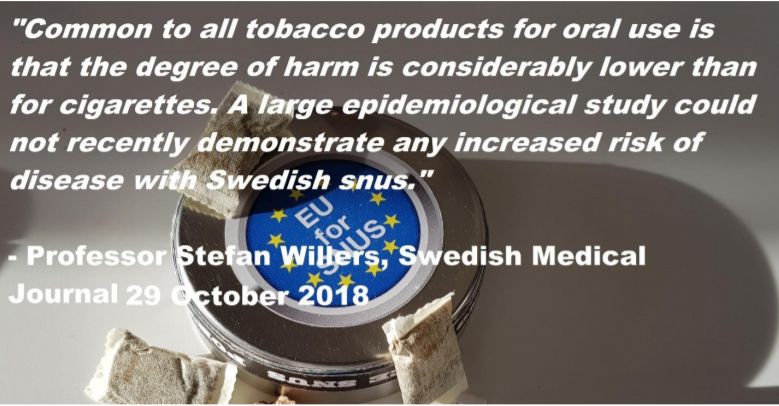 The Dutch government is proposing to ban the use of cigarettes and e-cigarettes as well as snus and other smokeless products in all public places. In Sweden, there has been a ban on the use of cigarettes and e-cigarettes in public places since December 2018 but snus is not included. In Sweden, 17% of the electorate uses snus. Snus has been used in Sweden for over 200 years and is thus by far the oldest harm reduction product (compared to smoking) in the world.

We urge the Swedish government to respond to the consultation on the Dutch proposal.

If the Dutch bill goes through, unopposed by the Swedish government, other EU governments are likely to conclude that snus is as dangerous as smoking. However, thanks to snus, Sweden has by far the lowest proportion of tobacco mortality and tobacco-related diseases in the EU and also the lowest smoking prevalence. This is because Swedes use snus instead of smoking. Research has shown that 86-87% of Swedish snus users are former smokers who stopped smoking for good.1

The potential impact on public health, for the 100 million daily smokers in the European Union is extremely worrying.2 Annually approximately 700,000 die prematurely from smoking-related diseases in the EU.3 However, nobody has been proven to have died from snus. Snus is not a health product but must be considered in relation to the dangers of smoking. Swedish snus, and tobacco-free snus, can be excellent tools to quit smoking. There is no ban on the sale of tobacco-free snus in the EU, and it is often manufactured by Swedish companies and sold to EU countries.

The epidemiological wonder of Sweden’s low smoking prevalence is often referred to as “The Swedish Experience”. On October 22, 2019, the US Federal Authority (FDA) decided to grant Swedish snus - the first product in FDA history - with approval as a "modified risk tobacco product" (MRTP) and approval to market eight Swedish snus products as being less harmful than smoking.4

Snus should not be a political issue at all. It is rather a public health issue. We in Sweden should be proud to have the lowest proportion of smokers in the entire EU (and probably the western world) as well as the lowest tobacco mortality and prevalence of tobacco-related diseases. In September 2017, the world's largest so-called meta-data study, comprising 26 years of published scientific research, concluded that Swedish snus does not increase the relative risk of any disease at all when using snus compared to non-snus users.5

1.Patterns of Smoking and Snus Use in Sweden: Implications for Public Health, https://www.ncbi.nlm.nih.gov/pubmed/27834883

EU for Snus is an advocacy group campaigning to give everyone access to nicotine replacement products with an onus on the right to enjoy smokeless tobacco products such as snus. EU for Snus’ Facebook group has several thousand members from about 100 countries, including all countries in the EU. The members are adult men and women, almost all of whom have stopped smoking with the help of snus. You can find out more about EU for Snus on their Facebook page.