Spanish NGO pushes for Europe's first tobacco-free generation
The European Commission has registered a Citizens' Initiative from Spanish NGO, NoFumadores, which proposes to ban the sale of tobacco & nicotine products to those born after 2009.  If adopted, it would also “extend” prohibitions on vaping outside.

The potential of tobacco harm reduction
A new policy paper from the European Liberal Forum, political foundation of the ALDE Party, calls on the EU to consider harm reduction policies to reduce the negative effects of smoking.

Parliamentary Question on the heated tobacco products flavour ban
MEPs Marco Campomenosi, Alessandra Basso, and Marco Zanni asked whether or not the Commission had the power to introduce the Delegated Directive to ban flavoured heated tobacco products.
https://www.europarl.europa.eu/doceo/document/E-9-2022-002648_EN.html

Answering on behalf of the Commission, Ms Stella Kyriakides stated that the Commission firmly believes that it acted within its delegated powers by defining heated tobacco products in the Delegated Directive and did not exceed its empowerment
https://www.europarl.europa.eu/doceo/document/E-9-2022-002648-ASW_EN.html

Parliamentary Question on disposable vapes
Irish MEP Chris MacManus asked the European Commission if it intends to deal with disposable vapes through the Single Use Plastics Directive or the Batteries Regulation. He added that the low-cost of disposables may make them attractive to younger people, and asked if the Commission intends to address this issue under the framework of the Tobacco Products Directive.
https://www.europarl.europa.eu/doceo/document/E-9-2022-002751_EN.html

In a written response the Commission stated that disposable vapes do not fall under the remit of the Single-Use Plastics Directive, and that discussions are ongoing on a proposed new Batteries Regulation to ensure batteries are properly disposed of and recycled. Going on to say that the Commission is running an overarching evaluation of the legislative framework for tobacco control to address market developments.
https://www.europarl.europa.eu/doceo/document/E-9-2022-002751-ASW_EN.html

Vaping petition gathers momentum
A petition urging the World Health Organisation to respect consumer rights and end its misinformation campaign against vaping has been signed by over 10,000 people. Organisers now want to hit 20,000 signatures before the Tenth Session of the Conference of the Parties to the WHO Framework Convention on Tobacco Control.

Add your name to the petition here:
https://www.change.org/p/don-t-let-your-right-to-choose-alternatives-to-smoking-be-taken-away

Belgium
In June the Belgian Government notified the European Commission, through the TRIS notification system, of its intention to ban the manufacture and sale of nicotine pouches. The standstill period has been extended after TRIS received comments from Croatia and Sweden, and a detailed opinion from Hungary.

France
The  Haut Conseil de la santé publique’s recently updated recommendations on the use of vaping products are quite negative. They assert  there is inconclusive evidence that vaping helps people quit smoking and also raises concerns over the long term health effects. The update comes just weeks after the announcement that the first WHO FCTC Knowledge Hub on education, communication, training and public awareness would be established in France.

Some reactions from tobacco harm reduction advocates in France are in this Twitter conversation here:
https://twitter.com/PrDautzenberg/status/1575142937964552198

More on the Knowledge Hub from COPWATCH is here:
Knowledge hub surprise! (copwatch.info)

Netherlands
On 1 September the Dutch Government opened a public consultation on the final stage of its flavour ban. A proposed amendment to the Tobacco and Smoking Products Order would see a white list of only 16 substances which are approved to make tobacco only e-liquids. The measure would amount to a de facto ban on vaping and has been heavily criticised by THR advocates and experts. The consultation closed on 28 September and received 1504 responses.

See our article for some background information on the proposal:
https://ethra.co/news/115-the-end-of-vaping-in-the-netherlands

Scotland
The Scottish Government has released an analysis of responses to its consultation on tightening rules on advertising and vaping products.

UK
Nicotine vaping in England: 2022 evidence review
The Office for Health Improvement and Disparities, formerly Public Health England, has published its latest evidence update of nicotine vaping in England. The report finds that vaping is substantially less harmful than smoking, and highlights the importance of non-tobacco flavours in helping those who smoke switch to vaping.

The page with the report and related documents is here:
https://www.gov.uk/government/publications/nicotine-vaping-in-england-2022-evidence-update

ASH Briefing
Action on Smoking and Health produced a briefing for local authorities on how to respond to concerns about youth vaping. The briefing called for a rational and balanced approach and stressed that media reports of an impending ‘public health catastrophe’ leading to a ‘generation hooked on nicotine’ are not substantiated by the evidence.

The New Nicotine Alliance has welcomed the briefing and says it sets the record straight on youth vaping:
https://nnalliance.org/nnanews/news/374-new-ash-briefing-sets-the-record-straight-on-youth-vaping

ASH has also issued guidance for schools and colleges:
https://ash.org.uk/uploads/ASH-guidance-for-school-vaping-policies.pdf

SCHORE
ETHRA was delighted to participate in SCHORE’s 5th Scientific Summit on Tobacco Harm Reduction. We were represented by Tom Glesson (NNA Ireland) who noted that around 27 million people in Europe use safer nicotine products. He added that having made the switch away from combusted tobacco,these people must be at the heart of decision making for smoking policy. 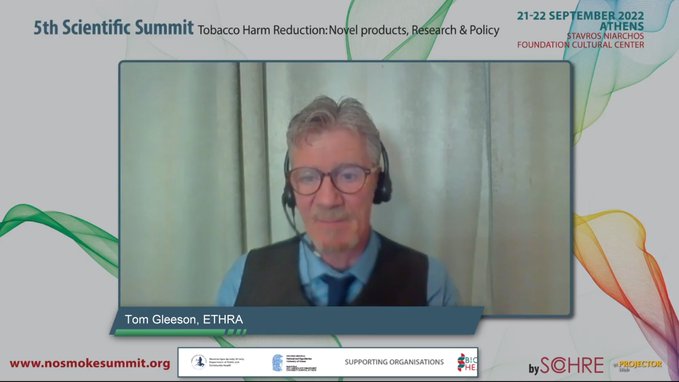 Middle ground approach to vaping
Proposals in a new paper by four highly regarded tobacco control scholars is certain to draw criticism from both sides of the tobacco harm reduction debate.

Misinformation, Consumer Risk Perceptions, and Markets
Leading experts in nicotine science and policy have warned of the dangers of misinformation around the relative risks of safer nicotine products.

Calls for better regulation of vapes as black market booms
A new report from Dr Colin Mendelsohn finds that Australia's prescription only model of legislation for vapes has been a resounding failure. As predicted, the policy has led to a thriving black market in unregulated vaping products.